`. . . to provide memorable moments for our members and guests'

Drive along the A556 on the Manchester to Chester route between the villages of Hartford and Sandiway on the Northwich bypass and you could be forgiven for missing a sign on the left that denotes Sandiway Golf Club. If you missed the sign you would have driven past the entrance to one of the finest clubs and one of the highest quality inland golf courses in the region. That opinion is supported by the fact that over the years Sandiway has been singled out to host international, national, regional and local championships. So many, in fact, it would take too much space to list them all. Suffice to say they briefly include the qualifying events for the Open Championship, the Girls' British Open Championship, the PGA Club Professionals' Championship and a number of Cheshire and Northern County Championships.

Its fairways are generous, but tree-lined with mature oak, beech and birch; the classic inland course trees predominate, and the picturesque back nine offers unrivalled views of Petty Pool, an old Cheshire mere, which forms a stunning backcloth, particularly on the eleventh and twelfth holes. The greens, although small by modern standards, are of the quality expected on a championship course. Visitors, as a fourball, or indeed as a party in the form of a golf society or a corporate business group are always welcome. Visitors become temporary members of the club for the time they are with us and are therefore able to enjoy the delights of the restaurant, with excellent food prepared by our award-winning chefs.

It is the way things should be to provide memorable moments for our members and guests. 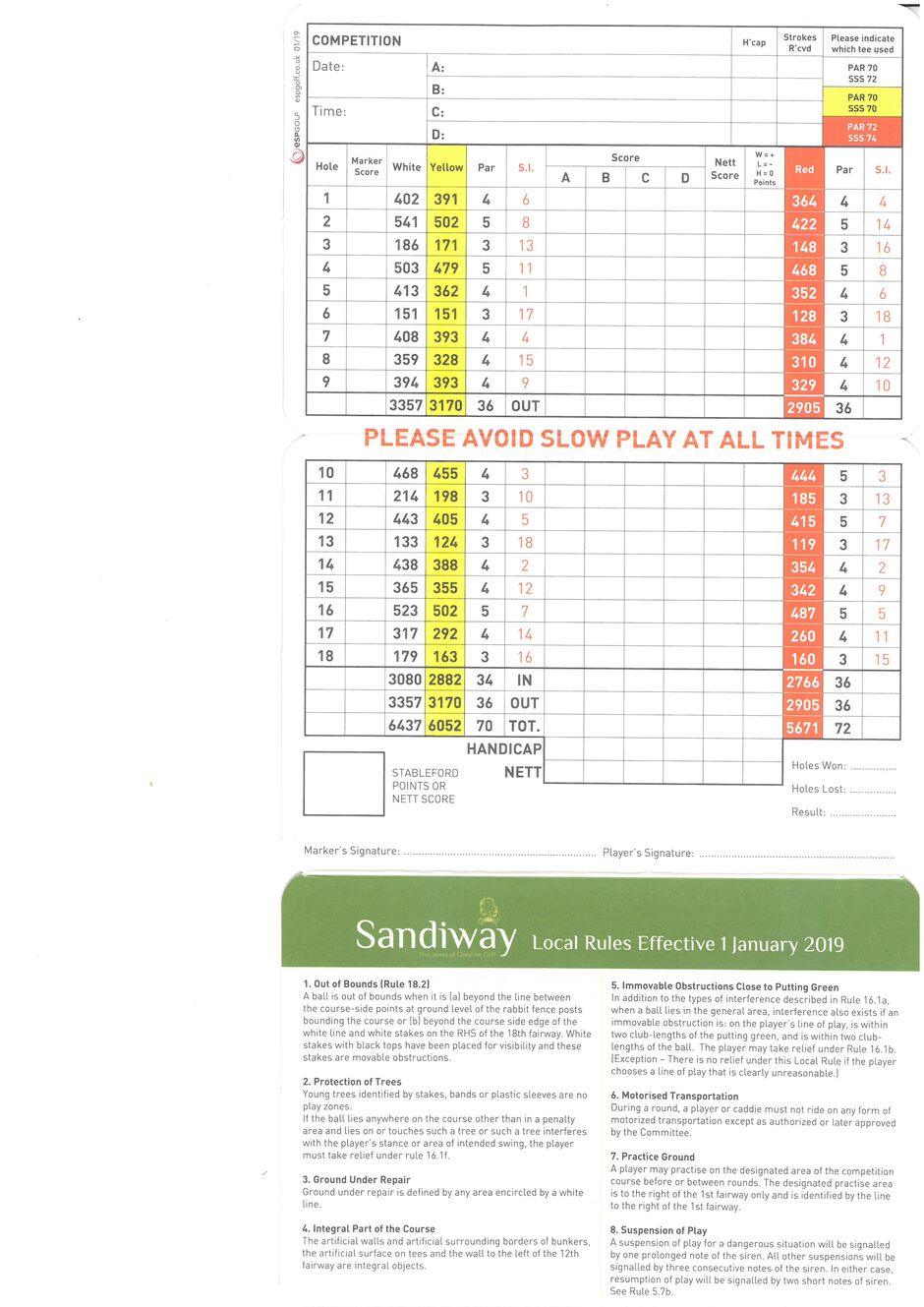 A ball is out of bounds when it is (a) beyond the line between the course-side points at ground level of the rabbit fence posts bounding the course or (b) beyond the course side edge of the white line and white stakes on the RHS of the 18thfairway. White stakes with black tops have been placed for visibility and these stakes are movable obstructions.

Young trees identified by stakes, bands or plastic sleeves are no play zones.

If the ball lies anywhere on the course other than in a penalty area and lies on or touches such a tree or such a tree interferes with the player’s stance or area of intended swing, the player must take relief under rule 16.1f.

Penalty for playing ball from a wrong place in breach of Local Rule: General Penalty under Rule 14.7a.

Ground under repair is defined by any area encircled by a white line.

4. Integral Part of the Course

Relief from interference by an immovable obstruction may be taken under Rule 16.1.

The player also has these extra options to take relief when such immovable obstructions are close to the putting green and on the line of play:

Ball in General Area. The player may take relief under Rule 16.1b if an immovable obstruction is:

On the line of play, and is:

Exception - No Relief If Line of Play Clearly Unreasonable. There is no relief under this Local Rule if the player chooses a line of play that is clearly unreasonable.

During a round, a player or caddie must not ride on any form of motorized transportation except as authorized or later approved by the Committee.

Penalty for breach of Local Rule: The player gets the general penalty for each hole during which there is a breach of this Local Rule. If the breach occurs between the play of two holes, it applies to the next hole.

Penalty for playing ball from a wrong place in breach of Local Rule: General Penalty under Rule 14.7a.